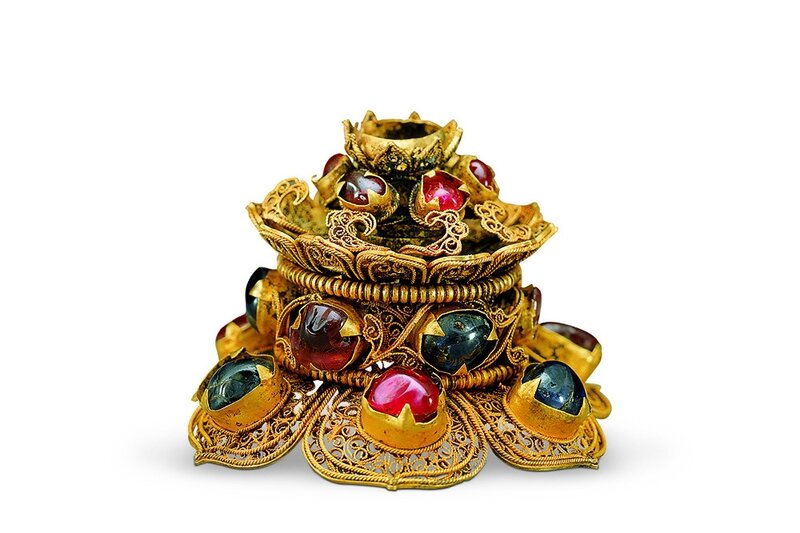 Gold hairpin with the flame design. Excavated from the tomb of Lady Wei at Zhongxiang, Hubei province. The pin itself is 12.3 centimeters (4.8 inches) long and the weight of the artifact is 115.4 grams (about 4 ounces). Photo © Chinese Cultural Relics. A pair of gold bracelets found in the tomb of Lady Wei at Zhongxiang, Hubei province. Both of them are about 7 centimeters (2.8 inches) in diameter. The bracelets have flower designs and the gemstones are a mix of sapphires, rubies and turquoise. Photo © Chinese Cultural Relics. Gold hairpin is decorated with a mix of sapphires and rubies found in the tomb of Lady Wei at Zhongxiang, Hubei province. The hairpin is 14.2 centimeters (5.6 inches) in width and its weight is 148.7 grams (more than 5 ounces). Photo © Chinese Cultural Relics. A fragrance box with gold chain found in the tomb of Lady Wei at Zhongxiang, Hubei province. It is decorated with lotus petal decorations and seven characters written in Sanskrit. The remaining gems include four sapphires, five rubies and one turquoise. Photo © Chinese Cultural Relics. A gold hairpin in the shape of a chrysanthemum (flowering plant) found in the tomb of Lady Wei at Zhongxiang, Hubei province. It has a large ruby at center and a mix of smaller sapphires and rubies on its petals. The diameter at the largest point is 11.7 centimeters (4.6 inches). The total weight of the artifact is 218.2 grams (more than 7.5 ounces). Photo © Chinese Cultural Relics. Two gold hairpins with branches and tendril patterns found in the tomb of Lady Wei at Zhongxiang, Hubei province. The hairpin at left has three sapphires, three rubies, one crystal and one turquoise. The one at right has two sapphires, four rubies and one cat’s eye stone. Photo © Chinese Cultural Relics. A gold hairpin with a seven petal lotus design found in the tomb of Lady Wei at Zhongxiang, Hubei province. A large ruby gemstone is still preserved at center. Photo © Chinese Cultural Relics.

Ancient China jewelry has been being made for more than 5,000 years. Everyone in ancient China liked to wear jewelry. The amount of jewelry worn by ancient Chinese was a sign of status. Amulets are good luck charms that provide protection to the person who wears the amulet. Jewelry in ancient China was made from a variety of materials. Materials included jade, silver, clay, glass, stone, and gold.

Beads were made of a variety of materials including glass, stones and clay. Researchers have found ancient Chinese necklaces that were made of over 4,000 glass beads. Glass beads were colorful and could be molded into a variety of shapes too. Stones were polished and clay beads were often painted with designs.

Ancient China jewelry had many different features and designs. The ancient Chinese were masters at making figurines of the Chinses Zodiac symbols like pigs, rats, birds, and horses.

The most widely used design was dragons. Dragons were a mythical object that the ancient Chinese revered. Dragons meant fertility, good fortune and prosperity. Each symbol or design used in ancient China jewelry had a hidden meaning.

For instance, turtles were used to symbolize longevity, catfish were to ensure a happy marriage, butterflies meant beauty and elegance, and elephants brought strength.

Like many items in ancient China, specific colors were reserved for specific people or reasons. Brides often wore red ancient China jewelry to symbolize fertility, vitality, joy, and the color was believed to protect from evil spirits.

How do we know about ancient China jewelry?

Like many ancient societies in the world, the ancient Chinese were buried with numerous artifacts.

The ancient Chinese believed that the person would need these items in the afterlife. Many archeological finds of jewelry buried in graves have been found.

1. What was the most popular material used to make ancient China jewelry?

2. What color of ancient China jewelry was worn at funerals or burials?

3. What was the most popular piece of ancient China jewelry?

4. Ancient China jewelry was worn by whom?

On the evening of February 11, 2004, Mr. Shu Xiao, Cultural Counselor of the Consulate General of PR.China in New York, attended the preview reception for the Exhibition of Imperial Jewelry of the Ming Dynasty at the invitation of the China Institute in America.

From February 12 till June 5, 126 pieces of jewelry from the Ming Dynasty (1368-1644) will be exhibited for the first time outside China. These unearthed jewelry made of jade, gold, silver and precious stones vividly bring back to the audience their glamour within traditional Chinese costume and the refined craftsmanship of the time. Proud of the the Exhibition of 17thCentury Chinese Landscape Paintings in last fall which was highly praised by the New York Times, Ms. Willow Hai Chang, Gallery Director of the China Institute in America, expressed strong confidence in harvesting another success.

The fashioning of jewelry and the usage of precious jewels and metals under the Ming Dynasty was conducted by a select number of people in the occupation of jeweler. Typically born into the profession, jewelers worked in workshops and, using a myriad of techniques, creating many beautiful objects. They were primarily commissioned by the Royal Family and Royal court, although occasionally they created pieces for other members of the nobility or for Buddhist and Taoist temples. Adapting the system from the previous Yuan Dynasty, the Ming Dynasty mandated all artisanal professions, such as that of a jeweler, hereditary and binding from generation to generation.[1] Beginning under the first Ming Emperor, the Hongwu Emperor, a complex system revolving around artisan craftsmanship developed in order to both fulfill the quotas imposed by the Ming Court as well as to protect the rights of the individual artisan and his family.[2] Guilds and other partnerships also developed in order to protect the different artisans themselves. Within the Royal Court, there was also the Imperial Jewelry Service, which meant that there was both always some sort of official oversight over the jeweler profession as well as a steady demand for the labor of a jeweler.[3]

One technique commonly used by jewelers during the Ming period was filigree.[4] Jewelers would twist together thin pieces of metal, such as gold or silver, to create intricate patterns and beautiful shapes. Hairpins provide some of the best example of filigree work during the Ming period. These pieces were delicate and appeared almost otherworldly in their complexity. Through hairpins one can often get a glance at a jeweler's best work, as hairpins were highly prized by the elite women in the Ming Court. and the level of design and grandeur of the hairpin represented the status of the lady it adorned. Another technique often associated with jewelers in the Ming times was gem embedding.[5] Beautifully cut gemstones, imported from Southeast Asia, would be placed in designs of delicate gold filigree, creating truly ornate pieces.

Gold, silver, and jade were some of the most commonly used materials by the jewelers in Ming times. Assorted gemstones and pearls were also used frequently along with the other materials. For the members of the Royal Court, a variety of headdresses, belts, trinkets, and other ornaments worn to denote status were made from a combination of silks and gold and other precious jewels. Beyond jewelry and other wearable goods, jewelers also created ornate items such as cups, bowls, trays, and tweezers for use within the Ming Court. In order to procure the raw materials to create these highly sought after products, jewelers had to turn to the court eunuchs who oversaw the mines, imports from surrounding regions, as well as tributes from neighboring states.[2] As evidenced by the abundance of gold and silver products found in Ming tombs, many of these items were so valued that they were chosen or commissioned to go into the afterlife.[6] It is from some of these pieces, preserved in the tombs, that one can see some of the best work of jewelers during the Ming Dynasty.

The Framed Coin Size Diameter is a measurement of the coin including the gold bezel, measured across the pendant from 9 o'clock to 3 o'clock. Some pendants that have an irregular shape are measured total width by height.

The weight shown is the total weight of the jewelry item. 1 ounce = 28 grams. For comparison, a Quarter weighs 5.7 grams and a Half Dollar weighs 12.5 grams.

Please contact us if you have any questions regarding the size of an item. 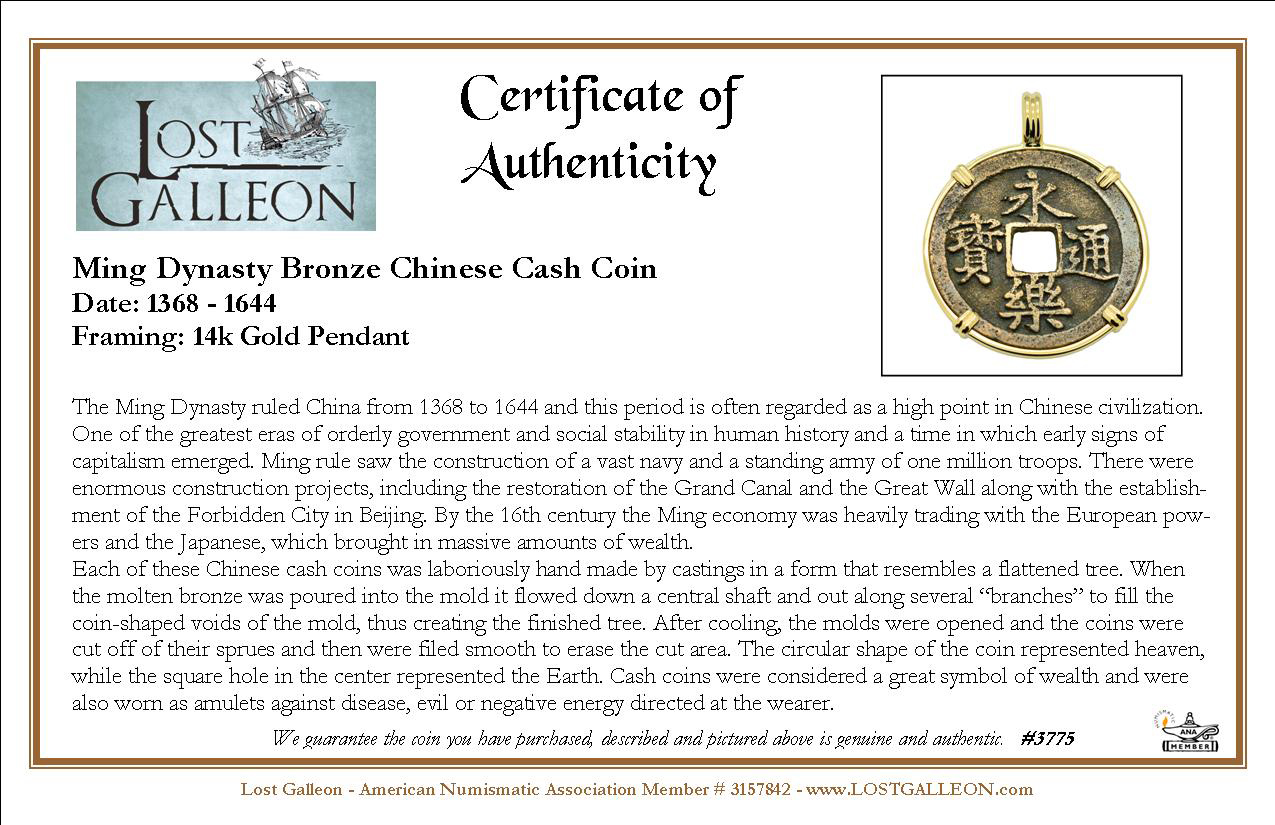 See All That's Included With Your Treasure Order!

Add a Necklace to your Pendant

The Ming Dynasty ruled China from 1368 to 1644 and this period is often regarded as a high point in Chinese civilization. One of the greatest eras of orderly government and social stability in human history and a time in which early signs of capitalism emerged. Ming rule saw the construction of a vast navy and a standing army of one million troops. There were enormous construction projects, including the restoration of the Grand Canal and the Great Wall along with the establishment of the Forbidden City in Beijing. By the 16th century the Ming economy was heavily trading with the European powers and the Japanese which brought in massive amounts of wealth.
Each of these Chinese cash coins was laboriously hand made by castings in a form that resembles a flattened tree. When the molten bronze was poured into the mold it flowed down a central shaft and out along several �branches� to fill the coin-shaped voids of the mold, thus creating the finished tree. After cooling, the molds were opened and the coins were cut off of their �sprues�, and then were filed smooth to erase the cut area. The circular shape of the coin represented heaven, while the square hole in the center represented the earth. Cash coins were considered a great symbol of wealth and were also worn as amulets against disease, evil or negative energy directed at the wearer.

Free shipping is sent via USPS Priority Mail (est. 2 - 4 business days) and applies to all orders over $100. The Lost Galleon Free Shipping in the USA special applies to all 50 States but does not include all US Territories.