Six Sigma DMAIC is a methodology used to reduce errors and improve business processes. It prescribes its own approach to analyzing and investigating root causes. The “DMAIC” acronym refers to the steps involved in this process, which are similar to the steps described in the introduction:

This root cause analysis template walks you through each of the steps above, and allows you to enter information about the root cause action plan, resolution, and investigative team. What’s more, this root cause template includes diagrams that can be used to visualize how different contributing factors (e.g., people, processes, and equipment) relate to one another, as well as to the problem itself.

What are the 5 Whys?

5 Whys is a Lean Six Sigma technique for refining a problem statement. In different situations, you might apply the technique to identify root causes, testable hypotheses, or to give a clear definition of a problem.

The simple description of 5 Whys root cause analysis is that you ask “Why?” you are having a problem. Then, you answer the question, then ask “Why?” again.

By the time you have asked “Why?” the right amount of times, you should have an idea about how to proceed to solve the problem.

Although 5 is the number in the name, it’s possible that the technique will require you to ask “Why?” a different number of times. When you use the 5 Whys root cause analysis to identify a root cause, you’re also hoping that the identification of the root cause will enable you to identify countermeasures that prevent the problem from happening again.

As with many Lean tools, 5 Whys root cause analysis is generally believed to have evolved alongside the rest of the Toyota Production System (TPS). Root Cause Problem Solving (RCPS) encompasses several other tools, such as Failure Modes and Effects Analysis (FMEA) and Ishikawa diagrams (sometimes called fishbone diagrams).

Use this 5 Whys template to get started with your own 5 Whys root cause analysis.

When to use 5 Whys

5 Whys root cause analysis is a useful tool anytime that the statement of a problem does not immediately reveal its solution.

Frequently, the absence of a solution is because the initial problem statement is a symptom of an underlying problem that has not been clearly identified or stated. The 5 Whys root cause analysis gets you to the real problem so that you can identify a real solution.

A traditional example of 5 Whys root cause analysis follows a pattern like the following:

Tips for 5 Whys root cause analysis

In the simple example, we could see that the engine overheated and decide that the solution is to increase the amount of coolant going to the engine. Asking “Why?” until you reach the root cause is vital.

When you’ve identified the root cause, it should suggest a solution to the problem, or at least a hypothesis that you can test. If you don’t have an idea of what to do next, try to keep going.

How to use 5 Whys root cause analysis

The Pareto rule suggests the 80/20 relationship. Colloquially stated, 80 percent of your defects come from 20 percent of your problems. Take time to identify the most important problems first and solve those.

You might have one or two people who already think that they know how to fix the problem. But if you’re going to do root cause analysis, take care that you get enough people together to find the root cause.

Involve people who work on the process at different levels so that causes that might not occur to one person can arise while you’re looking for the root cause. 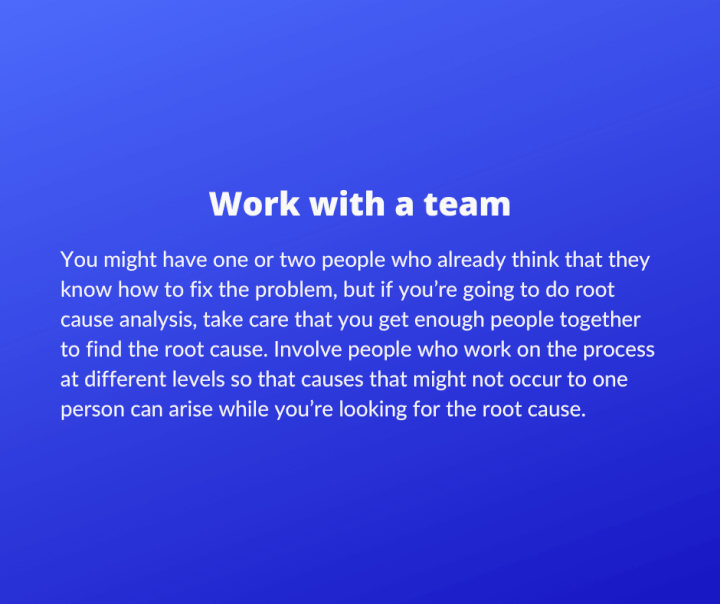 In the simple example, there was only one answer to each “Why?” question, but that’s not a requirement. For many processes, especially if you have a diversity of perspectives, you can even arrive at multiple root causes. Capture this thinking in your analysis.

Review all of your root causes with the team at the end to help identify what you think is most important. Don’t get so wrapped up in the process that you don’t review your results.

Although you’ll have collected a good team to use 5 Whys root cause analysis, that doesn’t mean that you shouldn’t get input from other people. If you have access to other resources, get their perspective on your possible root causes and their relative importance before you start to implement a solution. 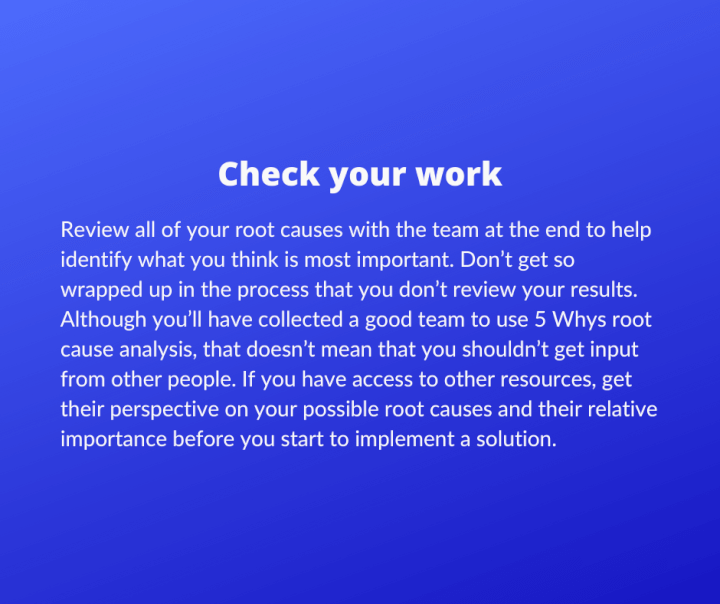 As your problems and processes become more complex, it’s helpful to have a 5 Whys diagram or 5 Whys template that you can use to get started.

For a complex process or for a problem with many possible root causes, a 5 Whys diagram can become quite large. The point of the process is not to be neat. However, it’s to identify root causes and to help you arrive at solutions. To do that, you need to be thorough in your search. Here’s an example of what a 5 Whys diagram might look like in a moderately complex case: 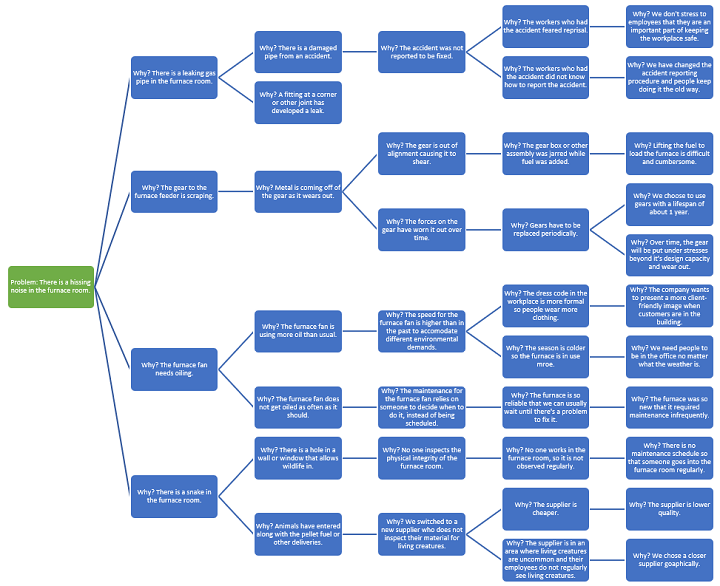 You can use this 5 Whys template to get you started with your own 5 Whys root cause analysis. The file contains a template for a simple, linear case and for a case with multiple branches at the first level.

Use this 5 Whys template to get started with your own 5 Whys root cause analysis.

To learn more Lean Six Sigma skills and tools, check out GoSkills range of courses, designed to prepare you for certification with IASSC.

Prepare to get certified in Lean Six Sigma

To fulfill the demand for quickly locating and searching documents.

It is intelligent file search solution for home and business.

Advertisement
Sours: https://5y1.org/document/5-why-analysis-template-excel.html
5-WHY Analysis: Detailed Illustration with Practical Example_PART-1 - Why why analysis