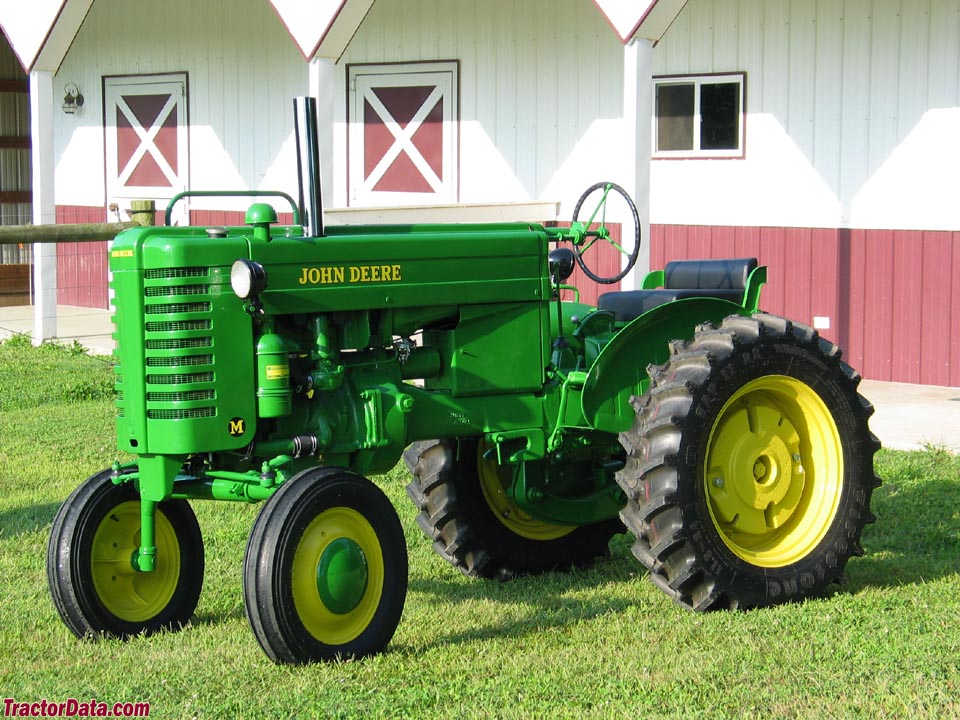 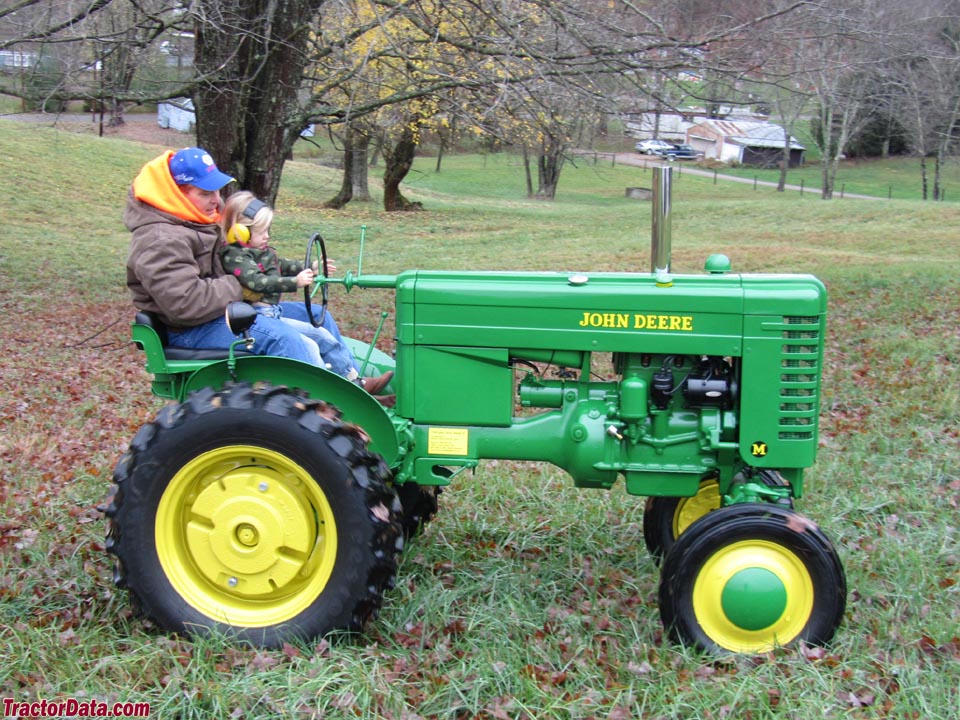 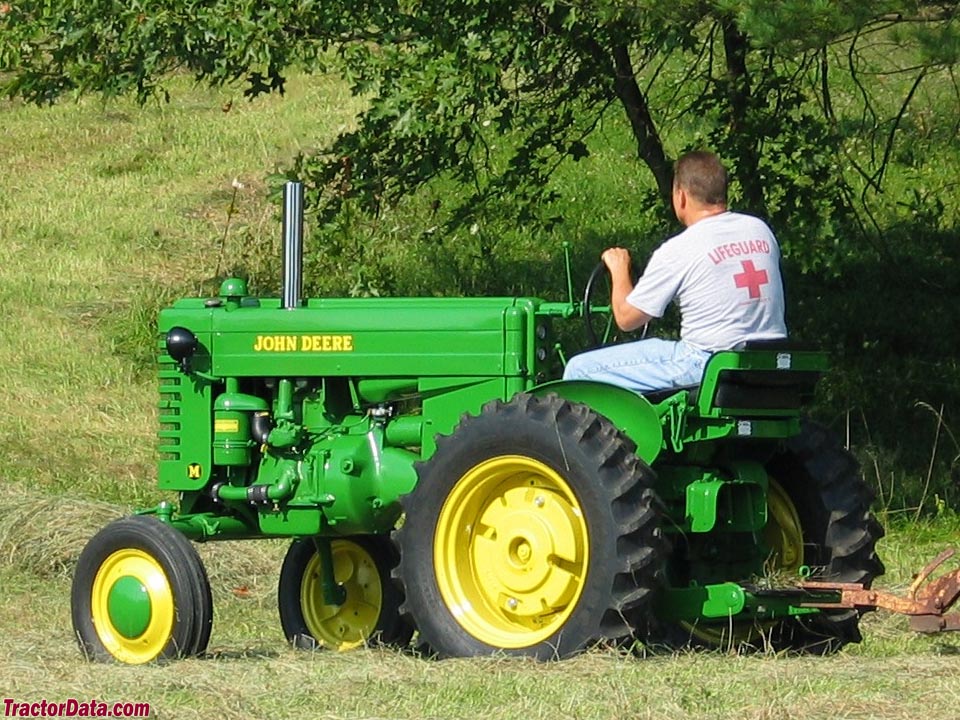 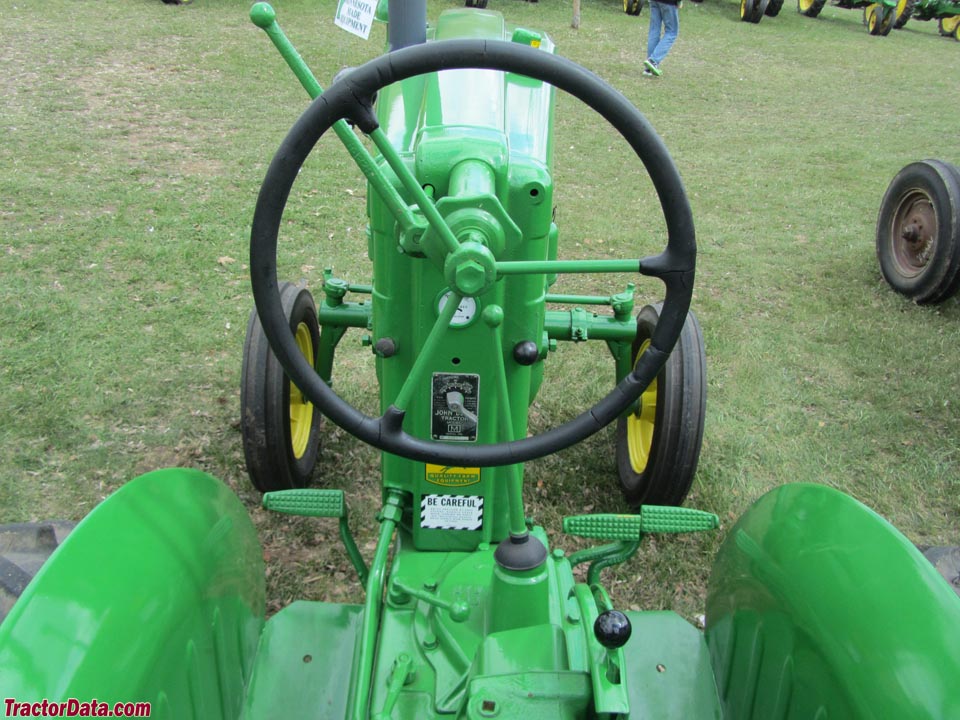 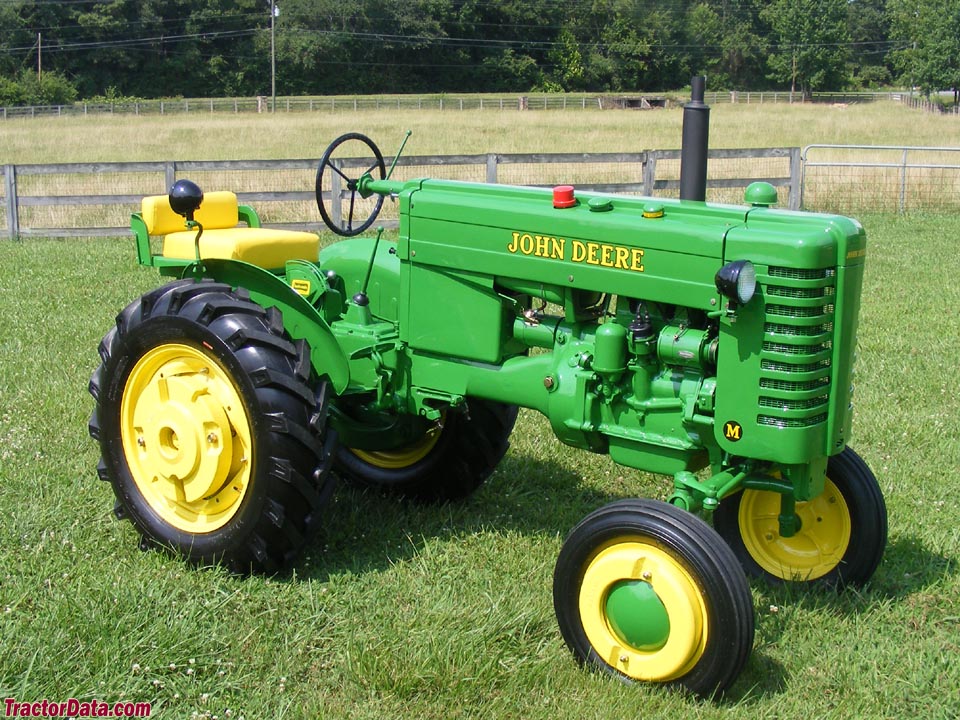 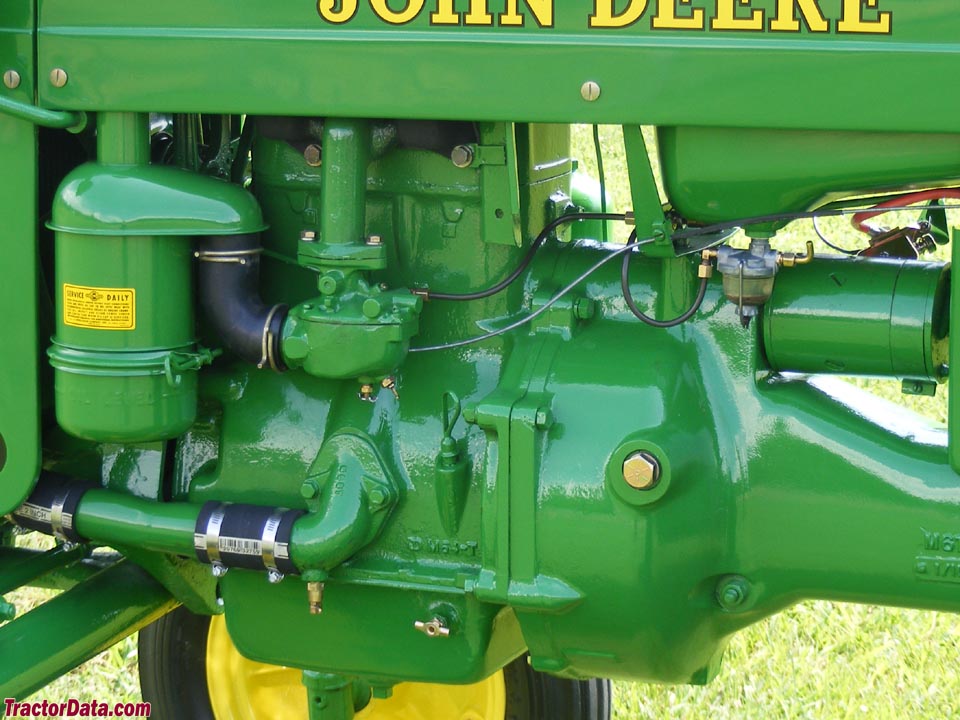 All-fuel John Deere M engine. Photo courtesy of John
©2000-2021 - TractorData.com®. Notice: Every attempt is made to ensure the data listed is accurate. However, differences between sources, incomplete listings, errors, and data entry mistakes do occur. Consult official literature from the manufacturer before attempting any service or repair.
Sours: https://www.tractordata.com/farm-tractors/000/0/3/31-john-deere-m-photos.html 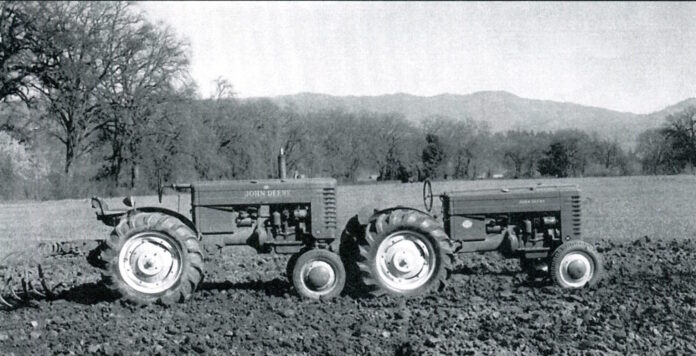 Was there a John Deere “M” utility tractor? Conventional wisdom passed on to me by the experts and the books that I have studied say “no”. So, what’s with this photo?

My involvement started innocently enough with a casual mention on the telephone to a friend that I was ready to put the engine in my John Deere “LA” utility. He said, “Boy, do I have some photos for you” and went on to another subject. I forgot all about his comment until a few weeks later when an envelope arrived with copies of several photos, including the one shown here. Later, I learned the photocopies were from the personal collection of Willard Nordenson, who was a John Deere engineer at Moline and later Dubuque. The photos were from a section of the collection showing dealer modifications.

Several of the photos included men and two also showed a company logo. The logo was for the John Deere dealership which covered the area where I live, taken in about 1950. I get my parts from the dealer’s successor (several owner and name changes later).

At this point, a digression. I don’t have permission to use names, so don’t look for any.

A few days after I received the photos, I showed them to the parts manager for the current John Deere dealer. After some head scratching, he thought that he recognized one of the men pictured and that the man was living in town. With a name and a telephone book, I found a number. After convincing the man who answered the telephone that I was not selling anything, I explained the photos and was invited to his home. 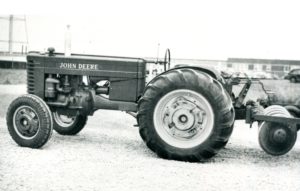 After looking at the photos, he said he was in the photos and also identified the other men. He remembered the tractor pictured and thought he knew when and where the photos were taken. He was sales manager for the dealership during 1949 and part of 1950. It turned out that he left the dealership soon after the photos were taken and moved away from the area. He had returned only recently (more than 45 years later). I decided this was my lucky break for the year, but since it was December, I didn’t worry about it.

As we talked, I began to realize this was quite a story and started taking notes. I was told that when the “M” came out, it was not competitive in this area because of its height and lack of three-point. Crops in the area included orchards, vineyards and hops. Ford and Ferguson were successful in getting most of the sales. John Deere corporate management was not sympathetic to the dealer’s request for a lower tractor because they did not expect enough sales to justify the cost. The dealer decided to build his own lowered tractor. Starting with an “M,” he rotated the finals to the rear and changed the fenders, foot rests, hitch and brakes to fit. He also lowered the front end and added three-point lift arms and center link brackets which used the existing tractor rockshaft.

Apparently, the tractor performed well, although the hydraulics were marginal at best. The tractor was mounted from the front like later 40-430 utility tractors. The lowered tractor worked well under trees and the rotated finals lengthened the tractor, reducing the front weight required to lift harrows, plows, etcetera with the three-point. This field engineering must have had the blessing of the branch manager because one of his engineers was involved.

After the modified tractor was working, the branch manager came up to the area where the tractor was being demonstrated and took photos (probably including the ones I had). He prepared a presentation which he took to corporate headquarters and personally gave to John Deere management. Soon after the presentation, the dealer was inundated with John Deere engineers. Also, what the man relating the story to me called an “M” with “finals rotated forward” was shipped by John Deere to the ranch the dealer used for demonstrations and compared to the dealer-modified tractor. He was not familiar with the term “MI.” I do not know if the shipped tractor was a prototype “MI” or an early production tractor. At any rate, the tractor with the “finals rotated forward” did not measure up to the dealer-modified tractor.

In a side comment, he mentioned they also forgot one thing in the design of the tractor John Deere sent out for comparison. Thinking I was on to something, I asked what. It developed that they had forgotten the crane to lift the operator on and off. Ease of getting on and off the “MI” did not impress the operators after using the dealer-modified “M.”

I was told the dealer modified 30 or so “M” tractors during the “M” production years. At least one was sold to another John Deere dealer to work in his personal orchards. The man sharing this information with me, and who was involved at the time, was convinced the dealer-modified “Ms” and John Deere engineers’ comparison of them to the “finals rotated forward” version of the “M” was responsible for the configuration of the 40 and later utility tractors.

The ranch the dealer used for demonstrations had changed ownership several times since 1950. A longtime resident of the area gave me the name of a man who might know what happened to the tractor in the photo. I called that lead and he didn’t know, but suggested another man to call. And so it went for five calls. On the sixth, I reached a man who, with his father, had managed the ranch for about 20 years. He not only remembered the tractor, he had taken it with him when he left the ranch. But he had sold it about 15 years ago. He had no idea who had bought the tractor and couldn’t even remember how the buyer knew it was for sale. (I guess this is an example of “good news, bad news.”)

I knew that around 30 “Ms” were modified, so I decided to see if any luck remained for the year. I ran the following ad in the classified section of a newspaper, which covers this area: “Wanted—to hear from anyone who has, or knows of, a lowered John Deere ‘M’ sold by the —- Company of — in 1950 or so.”

Beyond my wildest expectations, I ended up with five calls. Two of the callers, after telephone discussions, turned out to have 40 utility tractors. The other three sounded like they truly had lowered “Ms.” All callers invited me to visit them and look at their tractors. Bad weather and work schedules made it difficult to arrange visits and it took me almost two months to visit all three owners of the lowered “Ms.”

The first man that I visited had a lowered 1951 model with adjustable front axle and steel front wheels. Most of the features of the lowered “M” in the photos were on his tractor. It was still in use although it had been “ridden hard and put away wet.” Like many John Deeres, it just keeps on doing the job. It was not for sale.

The second caller that I visited surprised me with a second lowered “M” owned by his brother who lived next door. They shared equipment and used one “M” frequently in the summer, but the second one had only intermittent use. The first of their tractors that I looked at was a 1952 model with adjustable front axle and steel front wheels. The tractor was in good shape, but the three-point setup had been extensively modified from the design in the photos. Enough remained to show that the three-point originally did resemble the one in the photos. Their second tractor was a 1950 model with non-adjustable front axle and cast front wheels. It was in average condition and the three-point setup had been totally changed by one of the brothers. As we discussed the tractors, the brother who had purchased both told me how he had bought each of the tractors. The 1950 model had been purchased quite a few years ago in the town just north of him and he mentioned the name of the seller. When he named the seller, I realized this was the tractor from the demonstration ranch and undoubtedly the tractor in the photos.

We went to the house and around the kitchen table drank several cups of coffee and shared stories about tractors we used to have (and wish we still had) and dumb things we did on tractors as kids. The brothers decided they probably did not need both lowered “Ms” and agreed to sell one. They were a little surprised when I said I would rather have the older tractor in poorer condition. I explained the link to the photos and they understood my choice. I suggested a fair price and they accepted. I had not only located the pictured tractor, I had bought it.

The third caller I visited had a 1951 model with adjustable front axle and steel front wheels. It was in excellent condition and most of the dealer modifications to make the three-point setup shown in the photos were still there. It was not for sale.

It was the first to use Deere’s Touch-O-Matic hydraulic system. Electric starting and PTO were standard features. 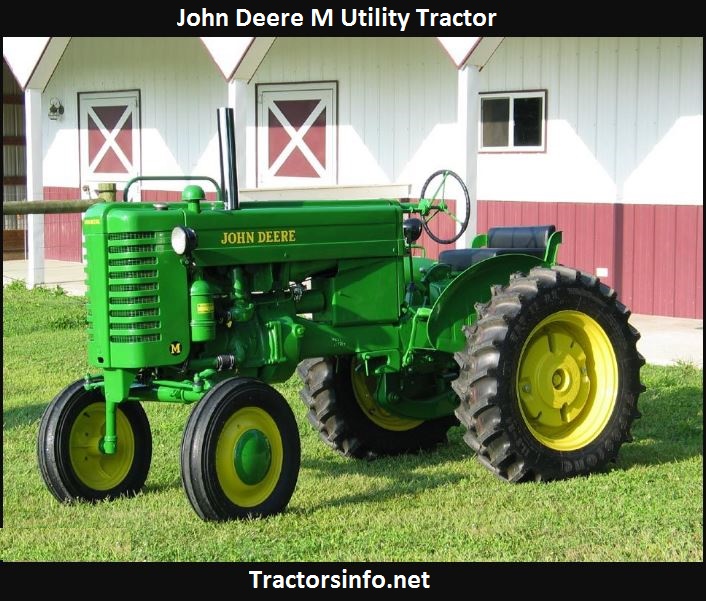 That was all about the John Deere M Tractor Price, Specs, Review, and Key Features, but if you have any query regarding this post, then please comment below in the comment box, We will solve your problem as soon as possible, thanks for visiting our site and stay tuned to our site for more new stuff like this.